The purpose of this was to test the methodology for a long-term behavior study, the applicability of the behavior inventory, and the efficacy of the ethogram template prior to the start of a long-term behavior study. The goal of this study is to capture behaviors relevant to keeping Morelia bredli in conditions allowing them freedom to express natural behaviors under human care. For example, if upon completion of a long-term study a behavior budget indicates M. bredli spend 63% of their time arboreally versus 25% terrestrially then it would be advisable for keepers to make it a higher priority to provide adequate vertical enclosure space and make substrate type or swimming areas a lower priority.

During this short test study, 3 of the snakes were in pre-ecdysis or “blue” and were less active than normal and hiding more than normal. This illustrates the need for a full study to be over a long period of time so that seasonal behavior changes, and behavior differences due to breeding season or ecdysis are averaged into the overall time budget for this species. Activity and behavior also varies with time of day or night necessitating observations to be conducted over all 24 hours in a day to obtain an accurate picture of what the animals are doing overall. If an animal is only watched during the day, it may appear to hide a lot and be sedentary; however, if the same animal was observed overnight it may demonstrate a high activity level and spend most of the time out in the open.

The results of our short sample study and the definitions of the focal behaviors are shown below. Keep in mind that many of these behaviors may be occurring simultaneously. For example, a snake may be “coiled” and “exposed” at the same time or may be “draped” in an “arboreal” location or a “terrestrial” location. The occurrence percentage is based on the average number of times the behaviors were observed among all 14 focal animals. Each snake was observed 25 times (once every ½ hour during the 12-hour period). The ethogram results of all 14 snakes were added together and the behavior occurrences averaged to produce a sample time budget for M. bredli. The snakes on average spent most of their time exposed (out in the open), arboreally (in the top half of their enclosure), in either a coiled or draped position.

3. TOP LEVEL - Majority of body in the top level of its vertical space; on perches, ledges, shelves, in vegetation, or on top of enclosure furnishings.

4. MIDDLE LEVEL – Majority of body off the ground, in the middle level of its vertical space.

5. GROUND - Majority of body on the ground, on or under substrate; ground level of its enclosure.

6. AQUATIC – Majority of body in water soaking or swimming.

8. LOCOMOTION – Movement; actively moving from one location to another.

11. COILED – Majority of body arranged or wound in a spiral or sequence of concentric circles or rings.

13. DRAPED – Majority of animal arranged loosely or casually on or around enclosure furnishings; resting atop something in a casual or relaxed way. 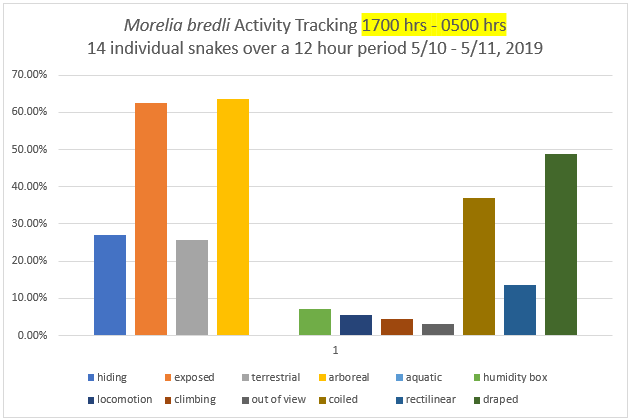 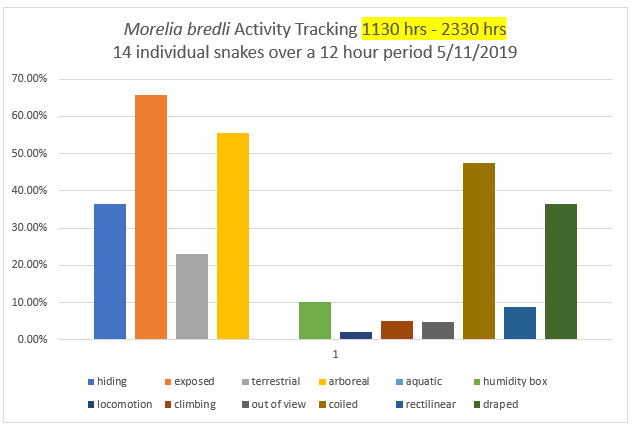 This test of the study methodology and tools has been useful, and there are minor changes to the ethogram and focal behaviors to make as we move forward. The data meant to be captured is how the snakes spend their time during a 24-hour day and (eventually) during a 365-day year under human care. This study is not capturing body language, body postures, fear or stress behaviors, defensive behaviors, feeding behavior, furnishing or hide type preferences, or stereotypies. These could easily be additional research areas; however, the focus of this study is a general time budget for M. bredli to better assist keepers with enclosure design and set-up to accommodate the animal’s natural behaviors.